Another great one from Dad!!

Japanese doctor says, "Medicine in my country is so advanced that we can take a kidney out of one man, put it in another, and have him out looking for work in six weeks."

A German doctor says, "That is nothing. We can take a lung out of one person, put it in another, and have him out looking for work in four weeks."

A British doctor says, "In my country medicine is so advanced that we can take half a heart out of one person, put it in another, and have both of them out looking for work in two weeks."

The American doctor, not to be outdone, interjected, "You guys are way behind. We are about to take a woman with no brains, put her in the White House, and then half the country will be out looking for work."
Posted by The Atlanta Atheist at 10/28/2007 09:57:00 PM No comments:

Look what I get to come home to... 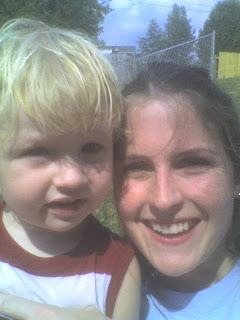 Don't I have the most beautiful wife and the best looking son? Unfortunately, Sophia was at school and missed this pic, but she is beautiful too!! Honestly, I don't know what I ever did to deserve such blessings in my life, but I sure am grateful for them!!!
Posted by The Atlanta Atheist at 10/28/2007 08:00:00 PM No comments:

Jeffrey R. Holland of the Quorum of the Twelve Apostles of The Church of Jesus Christ of Latter-day Saints
Posted by The Atlanta Atheist at 10/26/2007 06:10:00 AM No comments:

Let me make this short and sweet. When Al Gore stops flying around in his personal plane and stops driving with his entourage of SUVs to all of his "green" speeches, I'll agree that he has earned the Nobel Peace Prize. Until then, he doesn't deserve it any more than Castro or Idi Amin.
Posted by The Atlanta Atheist at 10/19/2007 11:25:00 PM No comments:

My dad sent me this joke, I'm sure I've heard it before, but it's been resurrected with the current presidential election in mind. I like it more now than ever...

Barack looked at Hillary, chuckled and said, 'You know, I
could throw a $1,000 bill out of the window right now and make somebody
very happy.'

Hillary shrugged her shoulders and replied, I could throw
ten $100 bills out of the window and make ten people very happy.'

John added, 'That being the case, I could throw one hundred
$10 bills out of the window and make a hundred people very happy.'

Hearing their exchange, the pilot rolled his eyes and said
to his co-pilot, 'Such big-shots back there'. I could throw all of them
out of the window and make 156 million people very happy.'
Posted by The Atlanta Atheist at 10/04/2007 07:54:00 PM No comments: