I can't say that I really expected a perfect season this year. With new head coach Nick Saban, I knew there would be a spark and improvement this year. And I can honestly say there has been improvement, although the final record of the regular season is the same as last year and we lost the last four games like we did last year. Once again the Iron Bowl has eluded us. 6 years is a long drought, but it hasn't been 9 years - the longest streak Alabama has on record in the Iron Bowl. We're going to lose some great talent in some of our departing seniors, but the talent that is up and coming, not to mention the outstanding recruits lined up by Coach Saban, gives hope for the next several years. I said at the beginning of this season that we'd win some games we weren't supposed to win (Arkansas, blowout of Tennessee). We also lost some I never in a million years thought we'd lose (UL Monroe). But at the end of the day, it's like Saban has been talking about. It's not immediately winning championships, it's creating a process of winning. It's getting back a winning culture. I sincerely believe we will be in national championship contention in a few years. Now that we're not on probation, we can use the scholarships as we need to bring in players who can become a national championship team. While I'm talking about recruiting, let me say this: At the beginning of the year, Les Miles started talking about his LSU team was his team (with the departure of Jimbo Fisher to FSU). Well, he conveniently forgot that 17 of his seniors were recruits of a man named Nick Saban. 17 seniors without which, LSU wouldn't have had a hope or prayer of being in national championship contention. I'm so glad that Arkansas beat them and they now have no shot at it. I also want to go on record to say that Les Miles will never beat Nick Saban again!!! Mark my words!!!!!! Truth be known, if the referees didn't call back that 41 yard pass, Alabama would have won the game. That call reversal, which was totally wrong - it was clear as day that it was a definite catch - changed the whole game. Now, Miles may go on and take the Michigan job. Personally I hope he doesn't. I want to see Alabama crush LSU like a cockroach next year with Les Miles at the helm. He doesn't have the recruiting power that Saban has, and he will never have the talent he now has again. That being said, tough year this year, Alabama has a lot of growing and building to do. Next year is going to be different. ROLL TIDE!!!!
Posted by The Atlanta Atheist at 11/25/2007 01:57:00 AM No comments: 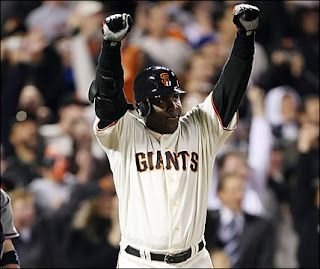 You know, everyone needs to back off Barry Bonds. We have this thing in the U.S. called "innocent until proven guilty." And yet, all these folks just assuming he's guilty of using steroids and lying about it. He's never been proven guilty. In fact, he's never tested positive for steroids. You know, I really don't know if he's used steroids or not. He says he never knowingly used steroids. How can anyone prove otherwise?? What ticks me off is Mark McGwire and others under oath denied using, so why aren't they being indicted as well?? Why is it only Bonds who is being called to question? Maybe it's race, I doubt it. So what if he's not good with the media? That's no reason to take away his record. I'm not particularly a huge Barry Bonds fan, but leave the guy alone. He's devoted his entire life to the game of baseball. How can people take that away from him? How can they blot his record and his name from the books?? I don't get it. Like I said, he NEVER tested positive for steroids. There's absolutely no proof he's knowingly used them. Give him some peace and let him enjoy playing the game. I hope he continues and keeps knocking them out of the ballpark and adding to his homerun record.
Posted by The Atlanta Atheist at 11/17/2007 01:33:00 AM No comments:

Can't believe my baby sister is 23!! Sometimes I wish I was 23 again. I was in much better shape back then. Hope you had a great birthday. Love you!!!